Before I get started, I must apologise for neglecting the blog in recent weeks. I have started a new job and have been struggling to find free time for hobby-related activities. I am now determined to set aside four hours per week for painting, modelling, writing or whatever else and making sure I keep up with output for the blog.
The iconic character of the 41st millennium is that ceramite-clad, genetically-modified, angel of death that is the Space Marine. Each one equivalent to a hundred men in battle, these peerless warriors are the ultimate soldiers, without whom the Imperium would wilt under the endless assault of their enemies. Each individual Space Marine is a product of arcane science unfathomable to the very minds that implement it, and for every Marine that serves his chapter, dozens of unfortunate, lesser men have failed to survive the implantation process that elevates them to the demi-immortal beings they are. Each of the thousand Chapters that serve the Imperium has a proud lineage that stretches back through the millennia, with the nine oldest having served with the Emperor and the Primarchs in the Great Crusade at the dawn of Imperial time. Each Marine serves with the greatest pride, loyal to the traditions of his Chapter and ever-willing to lay down his life in defence of the Emperor and his brethren. While their combat doctrines and recruitment processes may vary, each Chapter shares the common bond of duty to Terra. 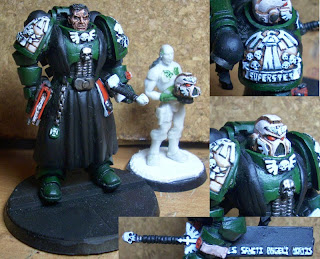 Gav "greenstuff_gav" Fry was kind enough to allow me to use photos of his Space Marines in this blog post.
Earlier this year when I had the luxury of free time, I made my way through the Deathwatch RPG supplements The Jericho Reach, and the Achilus Assault. I wanted to read them as inspiration for developing the Carthax Sector’s* background, and while I gained a lot of ideas, I was also taken with the idea of running a Deathwatch campaign, something I had dismissed previously as I had felt that Space Marine characters were too one dimensional to roleplay, and any campaign featuring them would be an endless line of combat encounters and nothing else. However, the writers at Fantasy Flight Games have done a fantastic job of opening different avenues of exploration for Deathwatch groups, including involving them in the political wrangling of the crusade’s higher command and attendant Inquisitors. The RPG line also does a good job of showing how a Space Marine character would function from a roleplaying point of view. Honouring the Chapter is foremost in a Marine’s mind, and serving with respect to his Chapter’s traditions can bring a Marine into conflict with his fellows and leave him at a disadvantage in combat. Though they lack the gamut of emotions that plague humanity, they are not just simple killing machines. Many will struggle with swallowing their pride and following orders that run counter to everything they hold in high regard. While a Space Marine will still never be able to search for rumours in a dirty tavern, campaigns tailored to them can still be a rewarding experience for players and GMs alike. 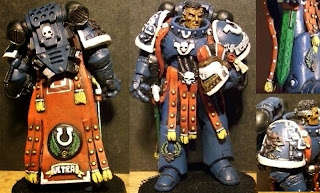 Gav is aiming to produce a model from each of the Chapters of the First Founding - seen here his Ultramarine, above his Dark Angel.
Taking all this into account, I have begun looking at Space Marines in Inquisitor in a different light. I have never been comfortable with high-powered characters in my Inquisitor campaigns as I always worry that they seriously unbalance things in favour of their players, and make things too easy without hamstringing them with GM powers. Doing so is a good way to turn off player interest as they will feel they are being treated unfairly, and with the limited interest in Inquisitor anyhow this is not something any GM will want to be doing. I feel that the answer is getting together with players long before your campaign has been plotted to discuss what characters they want to use and what goal they want to achieve. With lots of planning, Space Marines and other powerful characters can be used, but the GM has to be very careful that these characters are played appropriately and that players are reminded of their objectives regularly. It can be a tough gig, but with a firm but fair attitude, all players will have equal fun. The Artemis model is a hugely popular model too, and plenty of non-players even have one as a display piece. It’s a shame that so few get to grace the tabletop, so with the following guidance I hope we can all find a place for Space Marines on the Inquisitor table. 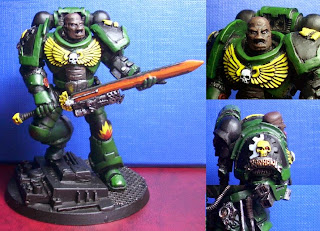 Here is Gav's Salamander.
One of the big problems with using Space Marines in Inquisitor was that the profile provided in the rulebook abused the D100 system that Inquisitor is based upon. Having any stats above 100 can break the game, especially for statistics that are rarely tested with modifiers and have an effect on other things like Speed and Base Injury Value or Damage bonuses. It is an oft-repeated observation that Artemis could cause more damage throwing bolt rounds at his enemies than by firing his bolter. Clearly, that is not as Inquisitor’s writers intended, and while a Space Marine should stand head and shoulders above the common man, some of their characteristics are plainly too high. Fortunately, an excellent set of alternative rules are available. Written by Eoin Whelan for Dark Magenta Issue 2, the Apocrypha Angeli Mortis not only sorts out the major issues with characteristic values, but also goes into unprecedented detail regarding the various Adeptus Astartes implants and their effects on a Space Marine. Missing and malfunctioning organs are now taken into account during the character creation process and various marks of power armour are also detailed, with their particular strengths and weaknesses included. I can’t recommend these rules enough when bringing Space Marines to game with.

As well as the loyalist Chapters, Gav has completed a Night Lord.
When writing campaigns and scenarios for Space Marines it is important to bear in mind the capabilities and limitations of the archetype. As I’ve said before, a Space Marine is unlikely to be found undercover searching for rumours, but they will be at the forefront of any military action. Setting a campaign in a warzone is a simple way to excuse the presence of a Space Marine, and the 41st millennium is hardly lacking in battlefields. Within this environment, a Space Marine could be guarding an important dignitary, acting as an ambassador to a warlike non-Imperial human enclave, or assigned an assassination mission. He may have been called in to assist an Inquisitor, or he may be acting on the bequest of his Chapter Master. It is important for the character to have a definite objective, and this should be stressed to the player. It would be unlikely for a Space Marine to be in the wrong place at the wrong time and drafted into an Inquisitor’s retinue, for example. With only a million across the galaxy, these characters don’t tend to mooch around on holiday. They will always be on duty, or training for their next mission. Whatever form this objective takes, it is key to keeping a Marine player on task, and stops the temptation to start butchering their way across the table. 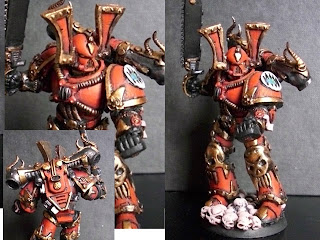 My personal favourite of Gav's First Founding models is his take on Kargos Bloodspitter of the World Eaters.
On that note, it is probably for the best if Space Marine characters aren’t directly opposing human PCs in your scenarios. Even with the slightly toned down version, they are still exceptionally deadly. This advice goes for other powerful characters like Eldar Corsairs and Daemons too. If mundane PCs meet their end early in a campaign, it’s over for everybody. The power of these characters allows for tougher enemies however, and most GMs will relish the opportunity to put away the goon squad and bring out the deadly assassins, Genestealers, Daemonhosts and murder servitors. By evening the odds with these enemies, Space Marine players will suddenly find they aren’t the all-powerful beings they thought they were and will have to approach scenarios more thoughtfully than they have done before. It is entirely possible to include allied warbands with Space Marines without making the table too hard for the mundane PCs or too easy for the Space Marine by introducing localised hazards that only the superhuman can overcome (and even then with a certain risk). For example, high radiation levels, high gravity, fire, or vacuums would be deadly or nigh on impossible for a human to negotiate, but not so a Space Marine. Cooperation between the Marine and his allies could be vital to the success of the mission; perhaps a series of remotely locked doors need to be opened so the Marine can access the area of high radiation, or perhaps the Marine needs his allies to trap the xenos creature he is goading towards the airlock. All the while the allies could be assaulted by lesser enemies. Conversely, the Marine could be tasked with holding off a powerful foe to allow his allies to set demolition charges. To draw an analogy to a popular film series, the Space Marine is an Avenger to the human PCs S.H.I.E.L.D. While the latter locates trouble and plans how to deal with it, the former is needed to save the day with their incredible attributes. 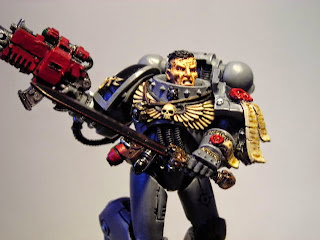 My Relictor is a good example of a Marine the Inquisition may wish to investigate.
For another take on the subject of Space Marines in games I recommend reading Gav Fry's Dark Magenta article “Huge Chunk of Man”. Not only does it talk about gaming with Marines, it also gives great advice on converting the Artemis model into different poses. Your Space Marines don't always have to be sprinting everywhere! If you want to see more of his First Founding project, including his work in progress models, head to Build Your Imagination.
This isn't my final word on Space Marines in Inquisitor by a long shot, so expect more on the Adeptus Astartes in the future. If you have any pictures of your Space Marines you wish to share, post them on the Facebook page, or tweet @T_C_Inquisitor. Finally, I promise the next blog post won't be so long in cooking up as this one was!
The Carthaxian Inquisitor


*It’s worth noting that the Carthax Sector Wiki is moving, and will now be found at: http://carthax.wikia.com/wiki/Carthax_Wiki. The move is not yet complete, so some content from the old wiki has yet to be transferred across.